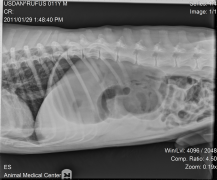 A few weeks ago, social media couldn’t stop talking about the risks of giving ice water to dogs, based on a blog written by a pet owner. As the story goes, a dog owner gave a bowl of ice water to her overheated dog. When the dog later arrived at an emergency clinic, the ER veterinarian admonished her for giving ice water, blaming it for causing the dog’s bloated stomach. Multiple veterinarians took to Twitter, Facebook and traditional media to debunk this urban legend.

So if ice water doesn’t cause bloat, what does?

Urban legend still prevails here. Hot food, cold food, big kibble, little kibble, too much food, too much exercise, too many carbohydrates, and stress have all been touted as causes of bloat, but remain unsubstantiated. Scientific studies have repeatedly shown that breed is a risk factor for developing bloat. Large and giant breed dogs with deep chests and narrow waists, like the Weimaraner, St. Bernard, Gordon setter, Irish setter, Rottweiler and Standard poodle, but even Chihuahua’s can experience bloat. Dogs with a littermate that has experienced bloat also have an increased risk of developing the disorder themselves. The risk of bloat increases as a dog ages. One study showed the presence of a foreign object in the stomach predisposed dogs to bloat. Nervous dogs, food gulpers and dogs fed once daily also may have an increased likelihood of bloat, and dogs engaging in a moderate amount of exercise are less likely to bloat. More bloat cases seem to occur in November, December and January, but they occur all year round, so dog owners must always monitor their dog for abdominal distension and nonproductive retching, which are two of the common signs of bloat.

Can bloat be prevented?

Families with one of the at-risk breeds previously mentioned or other large or giant breed dogs should discuss prophylactic gastropexy with their veterinarian. I recommend my patients of these breeds have their stomachs tacked in place at the time of neutering. This surgery can be done using minimally invasive techniques. This surgery does not prevent gastric dilatation, but has been determined to be cost-effective in preventing GDV.

Since once daily feeding and gulping food have been associated with bloat, divide your dog’s food into two daily portions and feed the food in a feeding toy or a specially designed go slow bowl. Be sure your dog gets daily exercise and maintains a healthy body weight.