What Gives a Dog a Pain in the Neck? 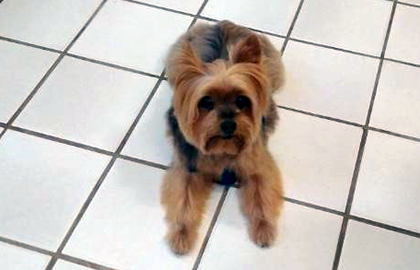 What Gives a Dog a Pain in the Neck?

Here, you see my cute Yorkie patient, Amort, looking good, but the past week has been anything but a good one for him. He lost his appetite and at first, we thought it was his chronic pancreatitis, but his family figured out he would eat if his food was held up off the floor, making us wonder if his neck was painful.
Neck Problems in Dogs
The neck is a series of small bones connected by ligaments and separated by thin cartilage plates called discs. Aside from some sort of traumatic injury to the neck like a bite wound or sporting injury, neck pain in dogs is most commonly caused by a disc that slips out of position and presses on the spinal cord or one of its branches. Breed plays a big role in canine neck pain. Small breed dogs suffer from two developmental abnormalities of the first two neck bones. The abnormalities, atlanto-axial malformation and cranial occipital malformation syndrome (COMS), can result in severe neck pain. Large breed dogs, like Doberman pinschers and Great Danes have neck pain because of cervical spondomyelopathy also known as “wobbler syndrome.” In addition to neck pain, all four of these conditions can cause an abnormal gait.

“Slipped discs” are quite common in dogs, especially dachshunds, toy poodles, beagles, Labrador retrievers and Doberman pinschers. At AMC, we care for many French bulldogs with IVDD due to their popularity in our city. The term “slipped disc” is not very accurate. Herniated or ruptured disc is often used, but if you have ever seen a disc in the operating room, the term “exploded” might be more descriptive. The neurosurgeon often has to remove pieces of disc from all around the spinal cord. Some dogs with IVDD can be managed with strict cage rest, which seems to many folks to be preferable to surgery, but I am sure putting your dog in a crate for 4-6 weeks is really hard on the entire family.

The term cervical spondmyelopathy is a mouthful. No wonder veterinarians simply call the disorder “wobbler syndrome.” Large and giant breed dogs are prone to developing wobbler syndrome which is characterized by a “wobbly” gait: short and choppy in the front legs with the hind legs held widely apart. In wobbler dogs, two different mechanisms cause the neck pain and gait abnormality. Either the discs between the neck bones press on the spinal cord or the neck bones expand, causing a problem. An MRI is used to diagnose wobbler syndrome, and in some dogs, surgical decompression of the spinal cord is necessary to alleviate the clinical signs.

The connection between the first and second neck bones depends on a tenuous little projection of the second neck bone called the dens. In small breed dogs such as the Chihuahua, Yorkshire terrier, Pomeranian and Pekingese, the dens does not always develop normally, creating an unstable connection between the skull and the first two bones of the neck. Severe instability can lead to extreme pain and paralysis from pressure on the spinal cord. Some dogs can recover with strict cage rest and a chin to chest neck brace; other dogs require surgery to stabilize the neck and decrease the pressure on the spinal cord. The AMC’s neurologists use a Kishigami technique to correct this disorder.

Similar to atlanto-axial malformation, COMS results from abnormal formation of bone, but in this syndrome, the skull bone is too small to adequately accommodate the brain. This results in an accumulation of spinal fluid which puts pressure on the back of the brain and spinal cord, causing pain. Dogs with this syndrome scratch at their face and ears – thought to be due to neuropathic pain. The poster dog for COMS is the Cavalier King Charles spaniel but King Charles spaniels, Brussels Griffons, Yorkshire terriers, Maltese terriers, Chihuahuas, and a host of others are also prone to the disorder. Not all dogs with the skull malformation show clinical signs. Diagnosis requires an MRI, but breeds known to suffer from COMS may be treated with pain medications and other drugs to decrease fluid accumulation without an MRI.

• Use a harness, not a collar.
• Keep your dog’s weight on the lean side to limit the physical stress on the neck.
• Don’t let your dog jump on or off the furniture.
• Carry your dog up and down the stairs.
• Feed your pet from an elevated bowl.