Why is my cat’s breathing noisy? All About Nasopharyngeal Polyps 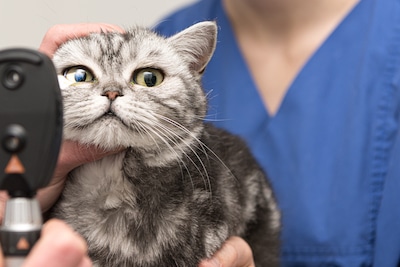 Why is my cat’s breathing noisy? All About Nasopharyngeal Polyps

Noisy breathing is common in cats. It can result from a variety of conditions, including: an upper respiratory infection, a sinus infection (from dental disease or a nasal foreign body), a tumor in the nose, nasopharyngeal stenosis (a narrowing of the back of the throat) or a nasopharyngeal polyp. Today’s blogpost details feline nasopharyngeal polyps.

Polyps are smooth, benign masses that typically occur in a cat’s throat or ears. The two photos accompanying this blogpost show polyps in two different cats. One is a fairly large polyp in the nasopharynx and the other occurs near the choanae, or the connection between the nose and the back of the throat.

The Cause of Feline Polyps is Unclear

Nasopharyngeal polyps typically occur in cats less than two years of age, but can occur in any age cat. While the exact cause of polyps in cats is unknown, a birth defect has been considered a potential cause due to the young age of most cats with polyps. Viral and bacterial infections have also been associated with the development of nasopharyngeal polyps, but it is unclear if the infection is the cause or result of the polyp. What is clear is that polyps are the second most common cause of disease in the nasopharynx after lymphoma, according to a study from the Schwarzman Animal Medical Center.

Cats with polyps exhibit a wide variety of clinical signs of varying severity. Noisy breathing tops the list, but upper respiratory signs like sneezing or nasal discharge can also occur. If the polyp occurs near the larynx, you may notice a change in your cat’s meow. Cats with polyps will sometimes gulp unrelated to eating and may frequently have ear infections.

The lucky cat will have a polyp that can be easily seen by looking in their ear, month or nose. If the polyp is not easily visible and the suspicion for a polyp is high, your veterinarian may perform a sedated oral examination and/or use medical imaging technology to locate the polyp. The polyp photographs in this blogpost were obtained using an endoscope when the cat was under general anesthesia. The black and white image in this blogpost is a CT scan, which was used to identify the extent of a polyp in one of the cat’s ear canals.

The treatment of feline nasopharyngeal polyps ranges from simple to complex. If the polyp is easily seen, “traction avulsion,” or pulling the polyp out using surgical instruments, is the most common treatment. If the polyp is not easily seen, more advanced surgical techniques may be used. For some cats, the middle ear becomes chronically infected and cleaning it requires a surgical procedure called bulla osteotomy.

Removal of a nasopharyngeal polyp results in an excellent prognosis. In a study published by AMC veterinarians, the outcome following polypectomy was good in all 29 cats monitored long term. Occasionally polyps regrow, but prognosis is still excellent with re-removal.

If your young cat has noisy breathing or a funny voice, ask your veterinarian about nasopharyngeal polyps.