The pancreas is an important organ that lies near the stomach, colon, and small intestine. It has two functions: to produce hormones, such as insulin and to produce enzymes that help in the digestion of food. When the pancreas becomes inflamed, the disorder is called pancreatitis.

The following factors contribute to the development of pancreatitis in dogs:

The most common signs of pancreatitis include:

To diagnose pancreatitis, other causes of the clinical signs first must be ruled out. Since the major signs of pancreatitis — vomiting and loss of appetite — are common signs of other conditions, blood tests, x-rays, and an abdominal ultrasound may be necessary to confirm the diagnosis. Measurement of canine pancreatic lipase in a blood sample is also commonly used for the diagnosis of pancreatitis.

Veterinarians do not have a specific treatment to stop the mechanism of pancreatitis (pancreatic digestive enzyme release and subsequent pancreatic inflammation). Treatment for pancreatitis includes correction of dehydration, and control of nausea, vomiting and pain. Serious cases are treated in the hospital. Home care may include withholding food and water until the vomiting ceases, followed by a low-fat, bland diet. Dogs may take several days to recover from a serious case of pancreatitis. 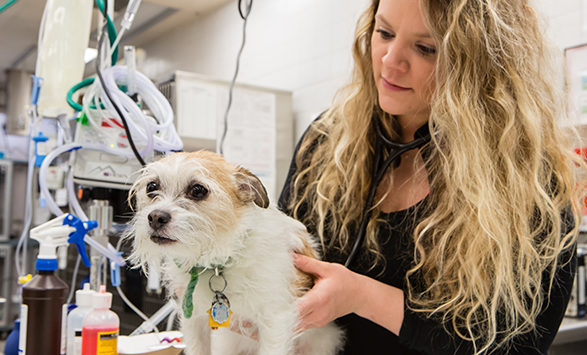 About Emergency & Critical Care at AMC

The Emilia Saint-Amand Krimendahl Institute for Trauma Care at the Schwarzman Animal Medical Center is a state-of-the-art facility to provide compassionate and expert care for pets that need emergency and critical assistance. AMC is a verified veterinary trauma center, fully equipped to manage life-threatening traumatic injuries and staffed...