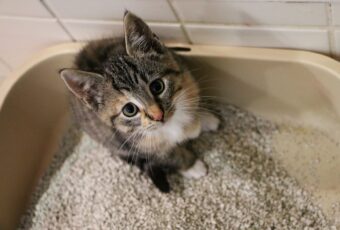 The medical term for blood appearing in urine is called hematuria. While there are many possible causes for the presence of blood in your pet’s urine, it is often due to the inflammation or infection of the urinary system. The urinary system consists of an upper and lower tract – the upper urinary tract contains the kidneys and ureters (tubes connecting the kidney to the bladder) while the lower urinary tract contains the bladder, urethra, prostate (males), and vagina (females). The diagnosis and treatment for hematuria will depend on the location of the bleeding.

The most obvious sign of hematuria is discolored urine, typically pink, red, orange, amber, or brown. The discoloration is more noticeable on light surfaces, such as snow, litter, or the floor. However, it is entirely possible that red blood cells may be present in the urine while the urine itself remains a completely normal color. If you notice additional signs such as the presence of blood clots or dark red urine, this is a sign of a medical emergency.

If you are unsure if your pet has blood in their urine, place a white piece of paper or cloth beneath your pet as they urinate.

Bladder Stones – also called cystic calculi, bladder stones form when there is an excess of minerals such as calcium or phosphate in the urine which clump together to form tiny crystals. These crystals can build up until they become large stones call uroliths, which can irritate the lining of the bladder or the urethra, causing painful urination and bleeding. Bladder stones can even obstruct the urethra and prevent urine from exiting the body, a medical emergency.

Feline Lower Urinary Tract Disease (FLUTD) – FLUTD is one of the most common cause for bloody urine in cats and is a broad term that includes several different conditions related to a cat’s urinary tract. Cats with FLUTD may strain to urinate, urinate frequently, have blood in the urine, and urinate outside the litter box. The most common cause of FLUTD is feline idiopathic cystitis (FIC). The term “idiopathic” means that the cause is unknown, while “cystitis” refers to inflammation of the bladder.

Prostate Disorders – the prostate gland, located behind the bladder, is important for reproduction as it provides the fluid found in ejaculate. An enlarged prostate (benign prostatic hyperplasia) or a bacterial infection can result in blood in the urine.

Urinary Tract Infection (UTI) – one of the most common causes of blood in the urine are UTIs. Bacteria enters the body through the urethra and travels up the tract, causing inflammation. The bacteria can travel until it reaches the bladder and even the kidneys. Other signs of a UTI include straining to urinate and passing only small amounts of urine.

Idiopathic Renal Hematuria (IRH) – IRH is a rare chronic condition in which the kidneys bleed, causing the pet to urinate dark red blood. The term “idiopathic” means that the cause is unknown.

Kidney Infection – UTIs can result in a kidney infection as the bacteria travels from the urethra to the bladder to the kidneys. Also called pyelonephritis, the kidneys become inflamed, which can cause pain, fever, vomiting, reduced appetite, excessive thirst, and excessive urination in addition to blood in the urine.

Kidney Stones – your pet may not show any signs of having kidney stones unless they pass into the tube called the ureter, which connects the bladder to the kidneys. Obstruction of the ureter can cause serious kidney damage and lead to abdominal discomfort, decreased appetite, lethargy, vomiting, and blood in the urine.

Polycystic Kidney Disease (PKD) – PKD is a condition in which multiple cysts (enclosed, fluid-filled sacs) form inside the kidneys.

Cancer – while tumors of the kidneys and urinary tract are uncommon in cats and dogs, they can cause blood in the urine. These tumors may be benign or malignant (cancerous). Transitional cell tumors in particular are cancers that appear in parts of the urinary tract such as the bladder, urethra, kidney, and ureter.

Clotting Disorders – problems with clotting (also called coagulopathy) can result in bloody urine. If blood clots are present in urine, it is considered a medical emergency.

Rodenticide Poisoning – accidental ingestion of rodenticide is a common cause of poisoning in pets, whether through direct contact with baits or by eating a rodent that has been poisoned. Rodenticide can cause the blood vessels to rupture, resulting in bleeding in various parts of the body including the gastrointestinal tract, the eyes, the nose, the lungs, and urine.

Trauma – if your pet is hit by a car or otherwise attacked, it can lead to a ruptured bladder.

In order to diagnose the cause of hematuria, your veterinarian will review your pet’s medical history, perform a physical examination, check the results of bloodwork and urine tests, and may even order an abdominal x-ray and ultrasound.

It is important to collect a sample of urine from your pet so that your veterinarian may submit it for a urinalysis. For information on collecting urine samples in pets, check out our blog post “How to Collect a Urine Sample from Your Dog or Cat”. If you are not seeing your veterinarian right away, make sure to refrigerate the urine sample until you can make it into the office.

Treatment of hematuria depends on the underlying cause of the bleeding. Treatment options can range from medical management (such as antibiotics for a UTI or pain medication for discomfort) to surgery (in the case of bladder stones) to changes in your pet’s diet to prevent stone formation.

When to see a veterinarian:

Regular visits to your veterinarian, which should include urine testing, allows your veterinarian to keep track of your pet’s urinary health. For dogs, make sure to occasionally monitor their urine for signs of discoloration or changes in behavior while urinating. For cat owners, stress can influence the development of FLUTD, one of the most common causes of hematuria in cats. In order to minimize stress, make sure your home environment has areas for your cat to play, climb, hide, and rest. Their litter should be cleaned daily and, if you have more than one cat, it is ideal for them each to have their own litter box. Increasing water intake can also make their urine less concentrated and therefore less prone to forming crystals. 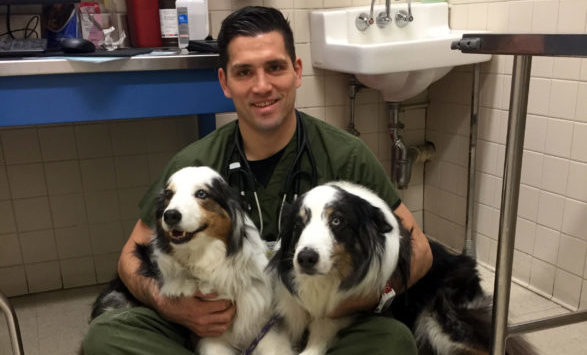